U.S. counterinsurgency efforts in Iraq and Afghanistan have failed to exploit information power, which could be a U.S. advantage but instead is being used advantageously by insurgents. Because insurgency and counterinsurgency involve a battle for the allegiance of a population between a government and an armed opposition movement, the key to exploiting information power is to connect with and learn from the population itself, increasing the effectiveness of both the local government and the U.S. military and civilian services engaged in supporting it. Utilizing mostly available networking technology, the United States could achieve early, affordable, and substantial gains in the effectiveness of counterinsurgency by more open, integrated, and inclusive information networking with the population, local authorities, and coalition partners. The most basic information link with the population would be an information technology (IT)-enhanced, fraud-resistant registry-census. The most promising link would come from utilizing local cell phone networks, which are proliferating even among poor countries. Access to data routinely collected by such networks can form the basis for security services such as enhanced-911 and forensics. The cell phones of a well-wired citizenry can be made tantamount to sensor fields in settled areas. They can link indigenous forces with each other and with U.S. forces without interoperability problems; they can also track the responses of such forces to emergencies. Going further, outfitting weaponry with video cameras would bolster surveillance, provide lessons learned, and guard against operator misconduct. Establishing a national Wiki can help citizens describe their neighborhoods to familiarize U.S. forces with them and can promote accountable service delivery. All such information can improve counterinsurgency operations by making U.S. forces and agencies far better informed than they are at present. The authors argue that today’s military and intelligence networks — being closed, compartmentalized, controlled by information providers instead of users, and limited to U.S. war fighters — hamper counterinsurgency and deprive the United States of what ought to be a strategic advantage. In contrast, based on a review of 160 requirements for counterinsurgency, the authors call for current networks to be replaced by an integrated counterinsurgency operating network (ICON) linking U.S. and indigenous operators, based on principles of inclusiveness, integration, and user preeminence. Utilizing the proposed ways of gathering information from the population, ICON would improve the timeliness, reliability, and relevance of information, while focusing security restrictions on truly sensitive information. The complexity and sensitivity of counterinsurgency call for vastly better use of IT than has been seen in Iraq and Afghanistan. Here is a practical plan for just that. 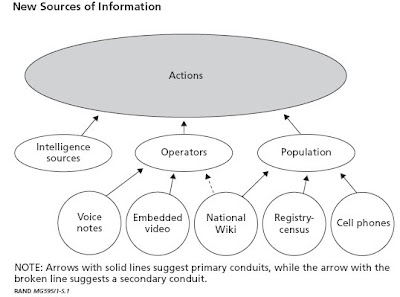 What kind of information system should the United States employ to conduct counterinsurgency most effectively? How can the system best serve users (rather than what someone has determined are users’ needs)? How best can the qualities of timeliness, reliability, and security be balanced? How can information supplied by the intelligence communities, by the observations of security forces, and by information that only the population can provide be integrated in one system? How can such information capture the complex dimensions of the human terrain over which insurgencies are fought?

The integration of the various desiderata of the cell phone system into a coherent software suite.

The integration of near-commercial-quality video cameras into helmets, rifles, and other portable gear.

Methods of porting the Wiki model to cell phones.

Improved indexing and categorization of incidents, observations,and other material relevant to counterinsurgency.

Human behavior and learning research to improve our understandingof how users might be trained to make effective use of ICON, notably in countering insurgency