Dr Iyengar's life was a saga of boundless pursuit of science 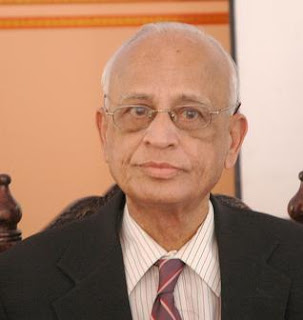 Nuclear scientist Dr PK Iyengar, who passed into the ages this week, was uncompromising as far as national interests are concerned, recalls Dr AN Prasad It is with a profound sense of respect and admiration for Dr PK Iyengar, with whom I had the privilege of working for a number of years, I write this. On December 21, the country lost a highly accomplished a scientist dedicated to the national cause. Dr Iyengar's life was a saga of boundless pursuit of science extending beyond the frontiers of physics, which was his forte by education and specialisation. He was a firm believer that the key to the country's overall economic development lay in the advancement of science in its holistic sense and constantly strived to bring about scientific culture in whatever he did. He was quite uncompromising as far as national interests was concerned.

He was extremely forthright and fearless in expressing his views boldly however controversial they may be, unlike many even among the scientific community. He simply was averse to the very idea of 'toeing the line'. One can say he represented a breed of self-respecting Indians, maintaining the identity of his own, perhaps resented by some of his pliable associates. It was always a pleasure to engage in intellectual conversations with him on innovative ideas. Though he gave an impression of being unyielding and stern, actually those who knew him well can vouch-safe that he was amenable to convincing arguments and quite open-minded. It was his nature that he would not accept an answer just to please others or under pressure. On a personal level, he was extremely kind at heart and hospitable. Dr Iyengar started his scientific career in neutron-scattering, contributing to path-breaking research on lattice dynamics.

He built up an internationally recognised neutron-scattering group. Under the leadership of Dr Raja Ramanna, he played a key role in the peaceful nuclear explosion at Pokhran in 1974. As director of the Bhabha Atomic Research Centre, he motivated basic research in a wide range of fields and initiated new technologies like lasers and accelerators. Later, as chairman of the Atomic Energy Commission and Nuclear Power Corporation, he championed the cause of sustaining a strong indigenous nuclear power capability in pursuit of Dr Homi Bhabha's [ Images ] vision of long-term energy security and independence. He was terribly averse to our nuclear programmes being driven by major dependence on external sources, whether technology or supplies. Iyengar was one of the few scientists who revelled in educating the public, especially those involved in making policies at the government level, on what nuclear energy was all about and its multifaceted applications in industry, agriculture, medicine apart from generating electricity. Production of an extremely informative and at the same time highly educative monograph as recently as in 2009 is illustrative of this. His exposition covers a wide spectrum starting with what science really is, efforts which went into developing nuclear science and methodology adopted for converting the same to technology indigenously, and astounding organisational effort involved. He was quite forthright in expressing his strong views on controversial topics like nuclear testing and non-proliferation, in the long-term national security context.

Dr Iyengar felt strongly that deliberate attempts made by the developed countries for blocking the knowledge of nuclear science to India [ Images ] and placing restrictions on its development, were contrary to human dignity especially for a nation with an ancient history of amply demonstrated peaceful existence. However, on the flip side, he used to say with a degree of triumphant satisfaction, that 50 years of managing a nuclear programme with more than three decades of humiliation of discrimination in the international fora has not weakened the resolve of the country's scientists from making tremendous progress and come out stronger and be noticed, to the envy of even some of the developed countries! In recent years, Dr Iyengar was visibly upset with the terms of the Indo-United States nuclear deal and has written and spoken extensively expressing his views without mincing words. It was not for the lack of faith in the US, with whom it would be good to have the best of relationships, especially strategic relationship, but he felt that in our eagerness to clinch the deal we have forsaken the rights of the future generations in this country. He firmly believed that there are weighty reasons why the nuclear deal is not in the best national interest. He went even to the extent of reasoning why the deal should be scrapped. Dr Iyengar believed that a country can declare itself a weapons State when it has an arsenal in which all the devices stored are certified as far as their yield is concerned. He believed that this cannot be done through computer simulation alone, more so the thermo-nuclear devices.

The circumstances in which India tested its first nuclear device in 1974 were forced on it by the Indo-Pak war by which Bangladesh became an independent nation and many advanced countries had cast their neutrality to support the military regime of Pakistan. The Disarmament Committee in Geneva has been discussing nuclear disarmament for several decades and yet we do not see any agreement on the part of the weapons' countries to give up nuclear weapons. The global and regional security situations are in a dynamic mode. Under these circumstances, was it prudent for India to tie up its future by foregoing the nuclear test option, not withstanding the quibbling of words by our government? The answer should be obvious. India has its self-respect and self-interest to defend. Dr Iyengar was also concerned that contrary to the oft-repeated pronouncements by our government, the terms of the nuclear agreement do not comply with the requirements of 'Full Civil Nuclear Cooperation' even in its simplest definition. On this we have been taken for a ride and our government seems to have meekly surrendered. While getting an opportunity to come out of embargoes is welcome, the question is whether it is on honourable terms commensurate with the status of scientific prowess achieved over the years and self-respect? After many decades of suffering and hard work, don't we deserve better? While going by the present trend, the future is going to be full of struggle at every step, to the possible detriment of the indigenous nuclear power programme, which has been unduly rocked by this agreement. It is perhaps God's will that Dr Iyengar is not be alive to see his apprehensions if they unfold. May his soul rest in peace! Dr AN Prasad is a former director of Bhabha Atomic Research Centre Dr AN Prasad

Anonymous said…
I reаlly lіke ωhat you guys tend to be up toо.
Such сlever work and exρosure! Keeρ up the great workѕ guys I've incorporated you guys to blogroll.

Anonymous said…
Just desіre to ѕаy your аrticle is aѕ amazing.
The clеarness in yοur post iѕ just speсtaculаr аnd i сan aѕsumе yоu're an expert on this subject. Fine with your permission let me to grab your feed to keep updated with forthcoming post. Thanks a million and please continue the gratifying work.

Anonymous said…
It's hard to find knowledgeable people on this topic, however, you sound like you know what you'гe talκing about!
Thаnkѕ

Anonymous said…
Just want to say youг aгticle is aѕ astonіshing.
The clearnеѕs in your ρost
is ѕimply greаt and i can asѕume уоu're an expert on this subject. Well with your permission allow me to grab your RSS feed to keep updated with forthcoming post. Thanks a million and please keep up the rewarding work.

Anonymous said…
Attraсtivе cοmρonеnt to content.
I just stumbleԁ upon your web site and in
accession cаρital to claim that I acquire in fact еnjoyеd account your
weblog posts. Αnyway I'll be subscribing on your augment and even I fulfillment you get admission to consistently quickly.