by Atul Kumar Mishra
in History 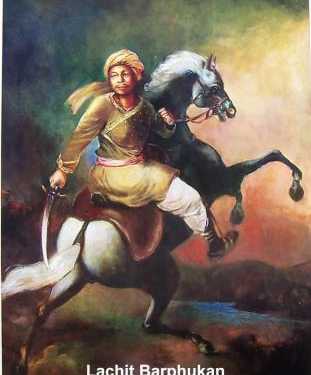 “We haven’t seen him…we don’t know if he is a mortal or a folklore but I know of people confessing that they have witnessed the golden radiance of The Hengdang” the scout said.

Advertisement
“What is the Hengdang?” a furious Aurangzeb asked.

“It is a sword sir…Lachit owns the blade…King Chakradhwaj Singha presented it to him” the scout replied meekly.

“What is he? A human, a ghost or these Hindus seriously have gods that walk around in human shapes with mythical swords in their hands?” Aurangzeb was exasperated.

“He is very much a man sir, the Commander-in-Chief of the Ahom army” replied another scout.

“If he is a man, then he will die” Aurangzeb announced. The royal durbar was dispersed.

Soldier3: This calls for a celebration

Lachit Borphukan: Warriors, we won but the victory is not final and the enemy is not weak. They can and they will attack with all their might so let’s not get carried away by this trivial triumph

Soldier1: But we captured the Mughal Governor, a large number of Mughal soldiers are in our confinement. Guwahati is free, Bargoda fort is ours now, Sukreswar hill has been captured…Mughals know that Ahoms are unconquerable

Lachit Borphukan: Yes we are unconquerable but only till we fight to live up to that reputation. We are valiant but Mughals are powerful…They have the numbers; we have courage, the waters of Brahmputra and the blessings of Kamakhya Mata. But we just cannot let this temporary victory bloat us with self-pride…That will be suicidal. Let us start preparing for a bigger fight.

The soldiers nodded in approval

King Chakradhwaj Singha: We have been under siege since the 13th century…We defended all 17 attacks; But Mir Jumla inflicted a humiliating defeat and imposed a shameful contract.

Prime Minister: Yes Maharaj, we pay 3 lakh as war indemnity. The western half of our kingdom from Guwahati to Manas River was gifted to the Mughals.

King Chakradhwaj Singha: And not to forget two Ahom Royal princesses were taken for the Mughal royal harem.

King Chakradhwaj Singha: My uncle late Maharaj Jayadhwaj Singha, on his death-bed, exhorted to me to reclaim the lost pride of Assam

Prime Minister: Yes Maharaj . Before he could offer words of sympathy to the king, the royal messenger arrived.

Messenger: Oh! Great king of the Ahoms…this messenger has been blessed by the great Kamakhya Mata to convey this news of immense joy. May I proceed?

Messenger: The army of the Ahom under the able and spirited leadership of the Commander in chief Lachit Borphukan has managed to drive the Mughals out of their land. Lachit arrested the Mughal Governor and a large number of Mughal soldiers have been held captive. Bargoda fort and Sukreswar hill have been captured. Guwahati is free and the western half of our kingdom is ours again.

King Chakradhwaj Singha: Oh Messenger…You are blessed by the illustrious Shakra himself…I cannot tell you how gratified I am. Tell Lachit to come here at once, and I will commemorate his victory in the grandest possible way.

The messenger fiddled with the message scroll edgily.

King Chakradhwaj Singha: What happened Messenger? Tell me if Lachit is alright?

Messenger: Yes milord, commander is fit, fine and in the pink of his health but he has started preparing for a counter attack by the Mughals. Presently, he is busy fortifying the area. The army is back to work after a brief rest of a night. I will convey your message but I believe he will prefer staying in the battlefield.

King Chakradhwaj Singha: Thank you messenger…you are right. Warriors belong to the battlefields. I thank you for this extremely pleasing news. You may leave now.

The messenger bowed and left.

Introduction
——————————
Lachit Borphukan, was the son of Momai Tamuli Borbarua, the first Borbarua (Governor of upper Assam and Commander-in-Chief of the Ahom army). Lachit Borphukan was trained in humanities, was well versed with scriptures and was a gifted commander. After serving as Soladhara Barua (scarf-bearer), chief of the Stable of Royal horses and Commander of the Simulgarh Fort, he was finally appointed the commander in chief of the Ahom Army by King Chakradhwaj Singha.

The Climax
————————-
The Mughals were planning a counter strike. Lachit and his men were busy creating mud embankments and clay walls to block their land. During the arrangements for the battle he ordered a clay wall for protection to be built within one night and employed his maternal uncle as the superintendent. Late in the night when Lachit came for inspection, he found that the progress of the wall was not satisfactory. When he asked his uncle for a clarification, his uncle quoted fatigue as the reason. The disregard of duty was intolerable to the commander in chief, Lachit got so furious that he beheaded his uncle on the spot, yelling “My uncle is not greater than my country.” The army got the message. The barricade was completed within that night.

Raja Ram Singh led the Mughal Army this time which gently navigated up from Dhaka towards Assam. The Mughal Army under Ram Singh consisted of 30,000 infantry, 15,000 archers, 18,000 Turkish cavalry, 5,000 gunners and over 1,000 cannons along with a large fleet of boats. But Lachit had created unassailable defences at Guwahati, and his army was upbeat. Lachit however realized that he stood no chance in front of the mighty Mughal army in an open land combat. The Brahmaputra at Saraighat, at its narrowest 1 km width, was chosen as the battlefield. A battle followed and soon Mughals realized that the impregnable mud embankments created by Lachit would not give them an easy pass way to Assam. Hence they resorted to their naval strength which was the weakest arrow in their otherwise all powerful quiver.

Mughals spent all they had to win Assam. They called for naval reinforcements. The sight of the massive Mughal fleet scared the Assamese Army. The Assamese soldiers lost their resolve to fight; Lachit was seriously ill by that time and was bedridden. He had himself carried on a boat with 7 boats accompanying him against the Mughal fleet. He yelled, “If you want to flee, flee. Tell the king that his general fought well and died for the nation.” This had a stirring effect on his men. They united and a frantic combat followed on the Brahmaputra. The Ahoms in their small boats surrounded the bigger but less navigable Mughal boats. Lachit Borphukan and his spirited army emerged as the winner and the Mughals fled in shame. Lachit Borphukan died of war wounds a year later.

The valor and chieftainship of Lachit Borphukan is unparalleled. He remains a celebrated war hero in the state of Assam but literally an unknown figure for the rest of India. In May 2000, the Assam Government instituted the Lachit Borphukan gold medal which is conferred to the best passing out cadet of National Defence Academy