What India must keep in mind when it comes to Turkey

C Raja Mohan writes: With Ankara set to play a major role in Afghanistan, Delhi needs to vigorously challenge Turkey’s positions where it must, and, at the same time, prepare for a more intensive bilateral engagement. 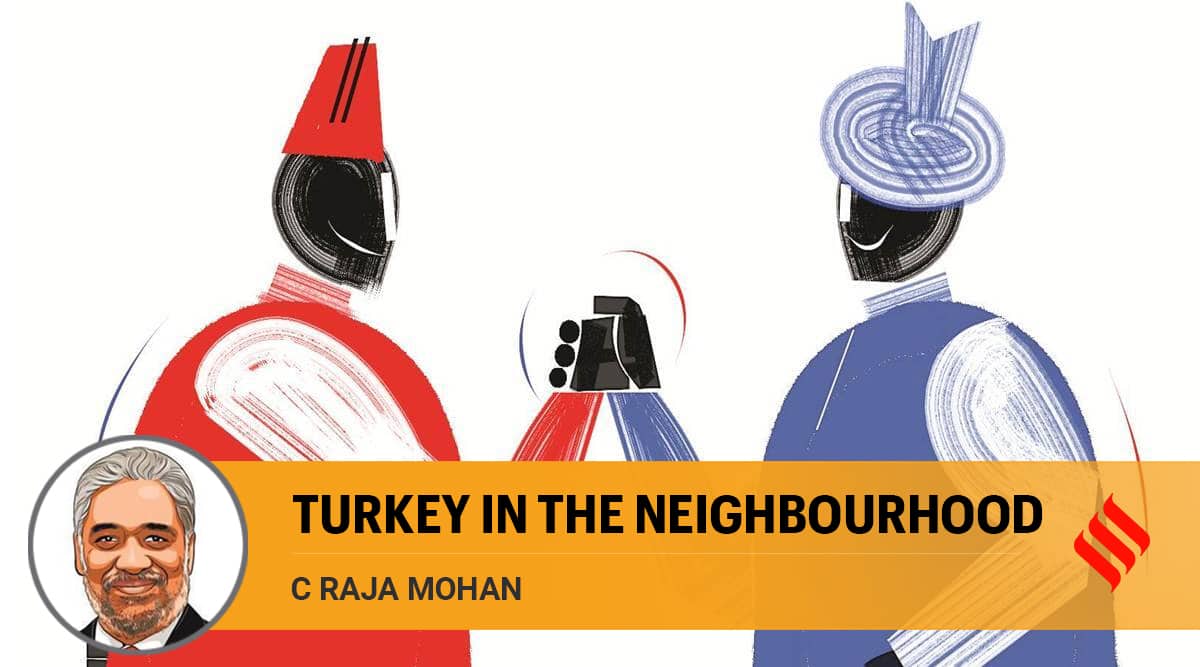 India, which has been at the receiving end of Erdogan’s internationalism, has multiple options in pushing back. (Illustration by C R Sasikumar)

As a new round of geopolitical jousting begins on India’s north-western frontiers, Delhi must deal with a number of new actors that have carved out a role for themselves in the region. Turkey, Qatar and China come readily to mind. While all three have become critical players in post-America Afghanistan, our focus today is on Turkey’s regional ambitions and their implications for India.

Ankara is in negotiations with the US on taking charge of the Kabul airport which is critical for international presence in Afghanistan that is coming under the Taliban’s control. Turkey has been running Kabul airport security for a while, but doing so after the US pullout will be quite demanding.

Taking a longer view, though, Turkey is not a new regional actor in India’s northwest. Ankara and Kabul have recently celebrated the centennial of the establishment of diplomatic relations. Through this century, Turkey has engaged purposefully with Afghanistan over a wide domain.

While it joined the NATO military mission in Afghanistan after the ouster of the Taliban at the end of 2001, Turkey avoided any combat role and differentiated itself from the Western powers. Ankara has contributed to the training of the Afghan military and police forces. It has also undertaken much independent humanitarian and developmental work.

Turkey’s good relations with both Afghanistan and Pakistan have also given space for Ankara to present itself as a mediator between the warring South Asian neighbours. Turkey’s “Heart of Asia” conference or the Istanbul Process has been a major diplomatic vehicle for attempted Afghan reconciliation in the last few years. Widespread goodwill for Turkey in Afghanistan has now come in handy for the US in managing some elements of the post-withdrawal phase. Turkey, in return, will of course demand its pound of flesh from the West.

Turkey’s growing role in Afghanistan opens a more difficult phase in relations between Delhi and Ankara. India’s opposition to alliances and Turkey’s alignments reflected divergent international orientations of Delhi and Ankara after the Second World War. And Turkey’s deepening bilateral military-security cooperation with Pakistan made it even harder for Delhi to take a positive view of Ankara.

The shared secular values between Delhi and Ankara in the pre-Erdogan era were not enough to overcome the strategic differences between the two in the Cold War. To make matters more complicated, the positive legacy of the Subcontinent’s solidarity with the Ottoman Empire and the Turkish Republic, emerged out of its ruins in the early 20th century, accrued mostly to Pakistan.

There were moments — during the tenures of Prime Ministers Rajiv Gandhi and Atal Bihari Vajpayee, when India and Turkey seemed poised for a more productive relationship. But those have been rather few and far between. Meanwhile, Turkey’s Islamist internationalism under Recep Tayyip Erdogan has inevitably led to its deeper alliance with Pakistan, greater meddling in South Asia, and a sharper contraction with India.

The Pakistani prism through which Delhi has long seen Ankara, however, has prevented it from fully appreciating the growing strategic salience of Turkey. Erdogan’s active claim for leadership of the Islamic world has seen a more intensive Turkish political, religious, and cultural outreach to the Subcontinent’s 600 million Muslims.

Turkey has become the most active international supporter of Pakistan on the Kashmir question. In Pakistan, Prime Minister Imran Khan has rallied behind Erdogan’s ambition to seize the leadership of the Islamic world from Saudi Arabia. Pakistan’s Army Chief, General Qamar Javed Bajwa had to step in to limit the damage with Saudi Arabia, which has long been Pakistan’s major economic benefactor.

Erdogan was quick to condemn the Bangladesh government’s hanging of a senior Jamat e Islami leader in 2016. But in a reflection of his strategic suppleness, Erdogan also offered strong political support for Dhaka on the Rohingya refugee crisis. As Bangladesh emerges as an attractive economy, Ankara is now stepping up its commercial cooperation with Dhaka.

Turkey, which hosted the Caliphate in the Ottoman era, had natural spiritual resonance among the South Asian Muslims. The abolition of the Caliphate in 1924, Turkey’s Westernisation under Ataturk reduced its religious significance. Erdogan’s Islamist politics are about regaining that salience.

Erdogan’s strategy marks the declining relevance of the old antinomies — between alliances and autonomy, East and West, North and South, Islam and the West, Arabs and the Jews — that so resonate with the traditional Indian foreign policy discourse.

Turkey has been a member of the North Atlantic Treaty Organisation since the early 1950s; but Ankara has no hesitation today in breaking from NATO policies when it suits its interests. Turkey has learnt to take advantage of the alliance without sacrificing its “strategic autonomy”.

If the fear of the Soviet Union led Turkey to NATO, a weaker Russia has opened space for Erdogan to collaborate as well as compete with Moscow. Ankara buys S-400missiles from Russia in defiance of NATO, while challenging Moscow’s primacy in the Caucasus.

Turkey was the first Muslim-majority nation that established full diplomatic relations with Israel. Erdogan now actively mobilises the Arab and Islamic world against Israel without breaking relations with Tel Aviv. Erdogan’s outrage on Israel is about presenting himself as a better champion of Palestine than his Arab rivals. Sceptics question the sustainability of Erdogan’s adventurism given Turkey’s economic vulnerabilities at home and growing regional backlash from several countries, including France, Greece, Egypt, Saudi Arabia, UAE, and India.

India, which has been at the receiving end of Erdogan’s internationalism, has multiple options in pushing back. The recent naval exercise between India and Greece in the Mediterranean offers a small hint of India’s possibilities in Turkey’s neighbourhood.

Many Arab leaders reject Erdogan’s policies that remind them of Ottoman imperialism. They resent Erdogan’s support of groups like the Muslim Brotherhood that seek to overthrow moderate governments in the Middle East. There is much that India can do to up its game in the Arab world.

Delhi is aware of Erdogan’s hypocrisy on minority rights. While pitching for self-determination in Kashmir, Erdogan actively tramples on the rights of its Kurdish minority at home and confronts them across Turkey’s border in Syria and Iraq.

For Delhi, there are larger lessons from Erdogan’s regional ambitions. One is the new fluidity in geopolitics in India’s extended neighbourhood to the west. Two, agency for regional powers is growing as the influence of great power weakens. Three, religious ideology, like the more secular ones, is a cover for the pursuit of power.

Finally, Erdogan has carefully modulated his confrontation with major powers by avoiding a breakdown in relations. For Erdogan, the choices are not between black and white. That should be a good guide for India’s own relations with Turkey. Delhi needs to vigorously challenge Turkey’s positions where it must, seize the opportunities opened by regional resentments against Erdogan’s adventurism, and at the same time prepare for a more intensive bilateral engagement with Ankara