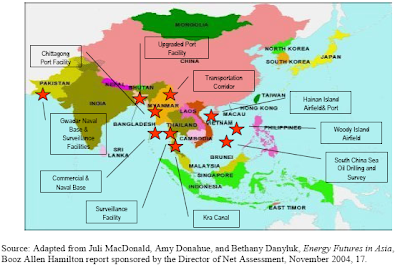 China is strengthening diplomatic ties and building naval bases along the sea lanes from the Middle East. This “String of Pearls” strategy is designed to protect its energy security, negate US influence in the region, and project power overseas.

Each “pearl” in the “String of Pearls” is a nexus of Chinese geopolitical influence or military presence.4 Hainan Island, with recently upgraded military facilities, is a “pearl.” An upgraded airstrip on Woody Island, located in the Paracel archipelago 300 nautical miles east of Vietnam, is a “pearl.” Acontainer shipping facility in Chittagong, Bangladesh, is a “pearl.” Construction of a deep water port
in Sittwe, Myanmar, is a “pearl,” as is the construction of a navy base in Gwadar, Pakistan.5 Port and airfield construction projects, diplomatic ties, and force modernization form the essence of China’s “String of Pearls.” The “pearls” extend from the coast of mainland China through the littorals of the
South China Sea, the Strait of Malacca, across the Indian Ocean, and on to the littorals of the Arabian Sea and Persian Gulf. China is building strategic relationships and developing a capability to establish a forward presence along the sea lines of communication (SLOCs) that connect China to the Middle East The Nature of the Pearls. China’s development of these strategic geopolitical “pearls” has been
nonconfrontational, with no evidence of imperial or neocolonial ambition. The development of the “String of Pearls” may not, in fact, be a strategy explicitly guided by China’s central government. Rather, it may be a convenient label applied by some in the United States to describe an element of China’s foreign policy. Washington’s perception of China’s de facto strategy may not be a view shared
in Beijing, but the fact remains that economic benefits and diplomatic rhetoric have been an enticement for countries to facilitate China’s strategic ambitions in the region. The port facility at Gwadar, for example, is a win-win prospect for both China and Pakistan. The port at Karachi currently handles 90 percent of Pakistan’s sea-borne trade, but because of its proximity to India, it is extremely vulnerable to blockade. This happened during the India-Pakistan War of 1971 and was threatened again during the Kargil conflict of 1999.6 Gwadar, a small fishing village which Pakistan identified as a potential port location in 1964 but lacked the means to develop, is 450 miles west of Karachi.7 A modern port at Gwadar would enhance Pakistan’s strategic depth along its coastline with respect to India. For China,the strategic value of Gwadar is its 240-mile distance from the Strait of Hormuz. China is facilitatingdevelopment of Gwadar and paving the way for future access by funding a majority of the $1.2 billion
project and providing the technical expertise of hundreds of engineers.8 Since construction began in
2002, China has invested four times more than Pakistan and contributed an additional $200 million
towards the building of a highway to connect Gwadar with Karachi. In August 2005, Chinese Premier
Wen Jiabao visited Pakistan to commemorate completion of the first phase of the Gwadar project and
the opening of the first 3 of 12 multiship berths.9
The Gwadar project has enhanced the strategic, diplomatic, and economic ties between Pakistan
and China. Other countries are benefiting from China’s new strategy, as well. In November 2003, China
signed an agreement with Cambodia to provide military equipment and training in exchange for the
right of way to build a rail line from southern China to the Gulf of Thailand.10 China also has an
ambitious $20 billion proposal to build a canal across Thailand’s Kra Isthmus which would enable
ships to bypass the chokepoint at the Strait of Malacca.11 Although this plan is stalled due to Thailand’s
noncommittal position and political opposition in Indonesia, Malaysia, and Singapore, it reveals the
scope and scale of Chinese ambition for the “String of Pearls.”

READ MORE
string of Pearls:meeting the challenge of china’s rising power across the asian littoral

March 06, 2010
Kabul/New Delhi/Washington, March 5 (IANS) India Friday said that the Feb 26 terror attack in Kabul will not deter it from helping rebuild Afghanistan as National Security Adviser Shivshankar Menon met Afghan President Hamid Karzai in Kabul to review the security of around 4,000 Indians working in that country. Menon, who arrived here Friday morning on a two-day visit, discussed with Karzai some proposals to bolster security of Indians engaged in a wide array of reconstruction activities, ranging from building roads, bridges and power stations to social sector projects. The Indian government is contemplating a slew of steps to secure Indians in Afghanistan, including setting up protected venues where the Indians working on various reconstruction projects will be based. Deploying dedicated security personnel at places where Indians work is also being considered. Menon also met his Afghan counterpart Rangin Dadfar Spanta and enquired about the progress in the probe into the Kabul atta
357 comments
Read more

March 27, 2010
Rethink before It’s Too Late http://www.irdiplomacy.ir/index.php?Lang=en&Page=21&TypeId=15&ArticleId=7108&BranchId=19&Action=ArticleBodyView Iran is losing the game to regional actors in its strategic depth –Afghanistan. By Houman Dolati It is no more a surprise to see Iran absent in Afghanistan affairs. Nowadays, the Bonn Conference and Iran’s contributions to Afghanistan look more like a fading memory. Iran, which had promised of loans and credit worth five-hundred million dollars for Afghanistan, and tried to serve a key role, more than many other countries, for reconstruction and stabilization of Afghanistan, is now trying to efface that memory, saying it is a wrong path, even for the international community. Iran’s empty seat in the Rome Conference was another step backward for Afghanistan’s influential neighbor. Many other countries were surprised with Iran’s absence. Finding out the vanity of its efforts to justify absence in Rome, Iran tried to start its
89 comments
Read more

March 24, 2013
By Jennifer Griffin, Justin Fishel Published March 22, 2013   A Pakistani fertilizer maker whose chemicals have been used in 80 percent of the roadside bombs that have killed and maimed American troops in Afghanistan is now seeking U.S. taxpayer subsidies in order to open a factory in Indiana.  The request appears to be on hold pending further review, but the situation has stirred outrage in Congress, where some accuse the Pakistani government of halting efforts to clamp down on the bomb-making.  For the past seven years, the U.S. government has known that the raw material calcium ammonium nitrate, or CAN, is making its way across the border into Afghanistan where the Taliban use it to fuel their most deadly weapons, namely the improvised explosive device. IEDs have long been the number one killer of U.S. and coalition troops.  The material largely comes from Pakistani fertilizer maker the Fatima Group. But the Pakistani government has stymied attempts by the Pentagon to stop the
317 comments
Read more