COMMENT on World Sanskrit Book Fair by a visitor 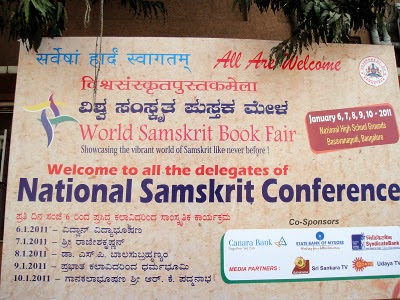 VISIT for complete pics
'
Namaskaarams to all!
I visited the just concluded World Sanskrit Book Fair at Bangalore and went around the fair on all the four days. It was amazing to find that many samskrita enthusiasts, and especially, youngsters of all colours and bearings!
I experienced some problems which I am sure almost many would vouchsafe. Hopefully, the concerned authorities will look into it and try to minimize it if not wipe it altogether :
1. The area for the Book stalls was undoubtedly small considering the huge turn outs on all the four days. Perhaps the organizers wouldn't have expected such a large attendance.
2. The book stalls where the publishers had displayed their books were congested. A larger stall size will be an eye-catcher.
3. The passage area being narrow there was invariably push-arounds all the time. You could not see the books properly, let alone decide to buy them. There was literally shoulder-clash everywhere.
4. Even the people who bought the books, were seen just bundling their choice without bothering about their utility vis-a-vis their knowledge levels. You practically had no time to decide.
5. I thought the crowd may be less in the evening hours when there was manoranjan karyakrama. But alas, I had no luck that time also.
6. The only day I could somewhat freely move about was the last day. Bad luck here again! The stalls wore an empty look, most of the books having been sold out.
7. Some of the book sellers and publishers I talked to, especially, Sarawathy Mahal Library of Tanjore, and Parimal publications, had openly admitted that they did not anticipate such crowds and had brought only few samples of books.
8. The Exhibition was an eye opener for any proud Indian! How wide the eyes and mouth of the school children and college students opened, perhaps their hearts too, you should have been there to believe!
9. The rest room facilities, of course, could have been better. But given the temporary nature of arrangements, it was the best. The Green Buckets could have been more and maintenance still left much to be desired!
10. Finally, the Indian Motherhood was at its best! What I mean the food arrangements for the delegates and visitors, couldn't have been better! ( Do we not equate 'Anna Dhata' with the Motherhood?)
On the whole, we had a sense of seeing the Real Bharat!
Three cheers to Samskrita Bharati! You have won the hearts of one and all!
A Proud Indian

Hearing Aids said…
I really appreciate your post and you explain each and every point very well.Thanks for sharing this information.And I’ll love to read your next post too
January 25, 2011 1:00 AM

Hearing Aids said…
I really appreciate your post and you explain each and every point very well.Thanks for sharing this information.And I’ll love to read your next post too
January 25, 2011 1:12 AM

gifts for Ramadan said…
I recently came across your blog and have been reading along. I thought I would leave my first comment. I don't know what to say except that I have enjoyed reading. Nice blog. I will keep visiting this blog very often.
June 27, 2012 12:52 AM

gifts for Ramadan said…
I recently came across your blog and have been reading along. I thought I would leave my first comment. I don't know what to say except that I have enjoyed reading. Nice blog. I will keep visiting this blog very often.
June 27, 2012 12:57 AM

March 06, 2010
Kabul/New Delhi/Washington, March 5 (IANS) India Friday said that the Feb 26 terror attack in Kabul will not deter it from helping rebuild Afghanistan as National Security Adviser Shivshankar Menon met Afghan President Hamid Karzai in Kabul to review the security of around 4,000 Indians working in that country. Menon, who arrived here Friday morning on a two-day visit, discussed with Karzai some proposals to bolster security of Indians engaged in a wide array of reconstruction activities, ranging from building roads, bridges and power stations to social sector projects. The Indian government is contemplating a slew of steps to secure Indians in Afghanistan, including setting up protected venues where the Indians working on various reconstruction projects will be based. Deploying dedicated security personnel at places where Indians work is also being considered. Menon also met his Afghan counterpart Rangin Dadfar Spanta and enquired about the progress in the probe into the Kabul atta
357 comments
Read more

March 27, 2010
Rethink before It’s Too Late http://www.irdiplomacy.ir/index.php?Lang=en&Page=21&TypeId=15&ArticleId=7108&BranchId=19&Action=ArticleBodyView Iran is losing the game to regional actors in its strategic depth –Afghanistan. By Houman Dolati It is no more a surprise to see Iran absent in Afghanistan affairs. Nowadays, the Bonn Conference and Iran’s contributions to Afghanistan look more like a fading memory. Iran, which had promised of loans and credit worth five-hundred million dollars for Afghanistan, and tried to serve a key role, more than many other countries, for reconstruction and stabilization of Afghanistan, is now trying to efface that memory, saying it is a wrong path, even for the international community. Iran’s empty seat in the Rome Conference was another step backward for Afghanistan’s influential neighbor. Many other countries were surprised with Iran’s absence. Finding out the vanity of its efforts to justify absence in Rome, Iran tried to start its
100 comments
Read more

March 24, 2013
By Jennifer Griffin, Justin Fishel Published March 22, 2013   A Pakistani fertilizer maker whose chemicals have been used in 80 percent of the roadside bombs that have killed and maimed American troops in Afghanistan is now seeking U.S. taxpayer subsidies in order to open a factory in Indiana.  The request appears to be on hold pending further review, but the situation has stirred outrage in Congress, where some accuse the Pakistani government of halting efforts to clamp down on the bomb-making.  For the past seven years, the U.S. government has known that the raw material calcium ammonium nitrate, or CAN, is making its way across the border into Afghanistan where the Taliban use it to fuel their most deadly weapons, namely the improvised explosive device. IEDs have long been the number one killer of U.S. and coalition troops.  The material largely comes from Pakistani fertilizer maker the Fatima Group. But the Pakistani government has stymied attempts by the Pentagon to stop the
321 comments
Read more