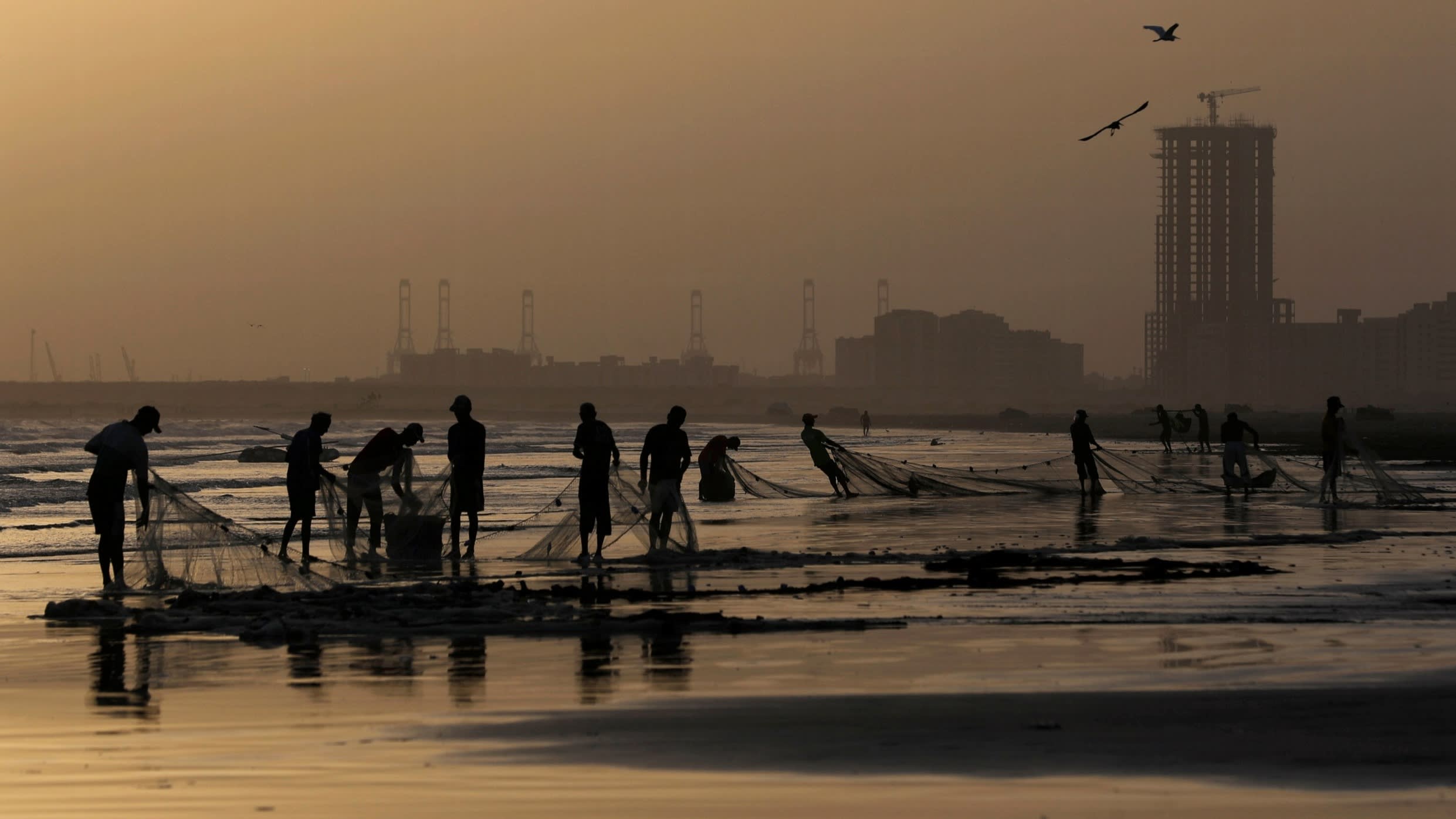 Fishermen like these in Karachi can't venture into deep waters the way big Chinese vessels can.   © Reuters
ADNAN AAMIR, Contributing writerSeptember 1, 2020 16:42 JSQUETTA, Pakistan -- Fishermen in Pakistan will protest the arrival of 20 Chinese deep-sea trawlers that will fish in the exclusive economic zone off Sindh and Baluchistan provinces.

The pressure group Pakistan Fisherfolk Forum has announced a campaign against the trawlers' arrival near Karachi. According to the PFF, fish stocks in coastal areas have already declined by more than 72% since last year due to uncontrolled fishing. Now they fear that the trawlers will further deplete Pakistan's marine resources.

The trawlers arrived off the coast of Sindh and Baluchistan in the first week of August. They have not started fishing yet. It is not known which part of China they came from.

PFF Chairman Muhammad Ali Shah said in a statement, "These vessels threaten the livelihoods of small fisher[men] by depriving them of catch today, and in future by ecologically destroying the sea."

Following the PFF's lead, fishermen in the southwestern city of Gwadar have also announced a protest campaign against the vessels. Gwadar is a central part of the $50 billion China-Pakistan Economic Corridor, a part of Chinese President Xi Jinping's Belt and Road Initiative. In the past, Gwadar fishermen have protested against Belt and Road infrastructure projects that prevented them from going to sea. 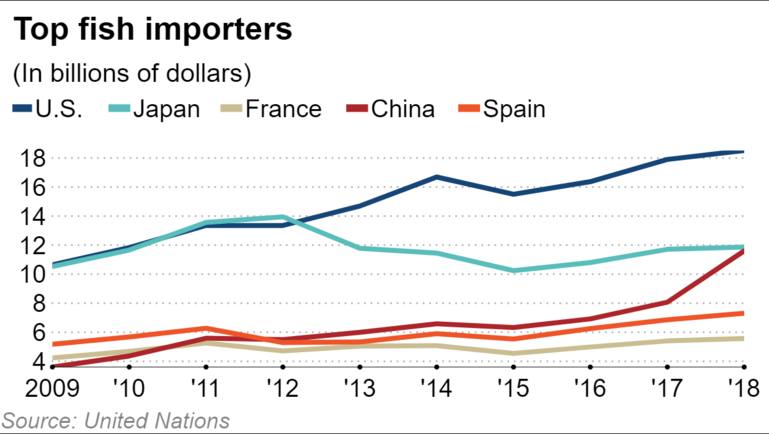 "Fishing in the sea is a source of livelihood for over 2.5 million people in coastal towns of Sindh and Baluchistan, and the new trawlers will deprive us of our livelihood," he told the Nikkei Asian Review.

In the wake of protests, the provincial supervisory body Registrar Cooperative Societies Sindh has written a letter to a manager of the Fishermen's Cooperative Society, which issued the permit to the Chinese deep-sea fishing vessels. The letter, a copy of which was made available to Nikkei, asks the manager to detail the agreement with the company that owns the vessels, the Fujian Hengli Fishery.

The issue has reached the National Assembly. Aslam Bhootani, who represents Gwadar, told the legislature last week that the arrival of the Chinese trawlers has created fear among the area's fishermen. 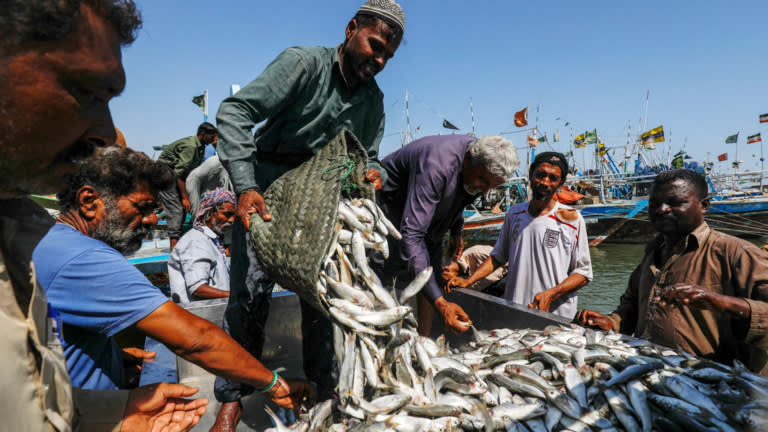 Fishermen return with the day's catch in the village of Ibrahim Hyderi on the outskirts of Karachi.   © Reuters

Bhootani told Nikkei that the deep-sea vessels "have large fishing nets which not only capture a lot of fish but also destroy the ecology of the marine life." He added that the fishermen of Gwadar have small boats and can't go into deep waters. "Local fishermen of Gwadar do not stand a chance against these Chinese vessels, and that is why we oppose them," he said.

Experts also view the protests against the backdrop of wider resentment against Chinese economic expansion in Pakistan under the Belt and Road framework.

Mohan Malik, a professor of strategic studies at the National Defense College of the United Arab Emirates, told Nikkei that most developing countries that signed on to the Belt and Road Initiative do not have much leverage to say "no" to China even when its deep-sea fishing fleet engages in predatory practices at the expense of workers and fishermen in host countries. 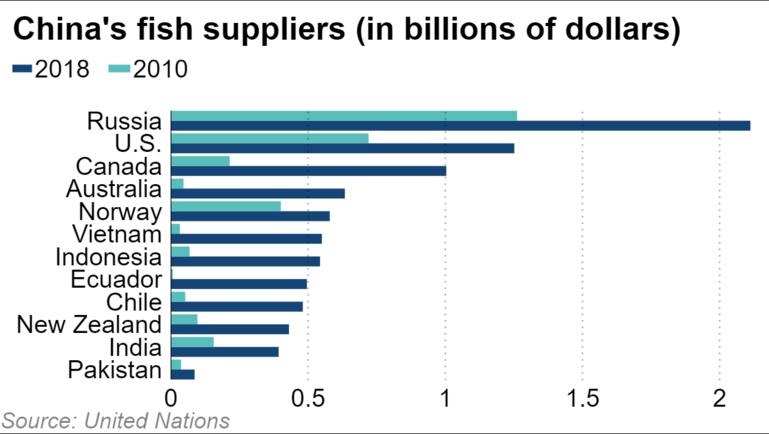 China has built the world's largest fishing fleet with heavy government subsidies, Malik added. Faced with depleted fish stocks in the seas around China, Beijing's giant trawlers are increasingly targeting new waters, such as the Arabian Sea off the coast of Pakistan, to satisfy the country's insatiable appetite for seafood -- one-third of total world consumption.

Resentment against the Chinese is also reflected in the Gwadar fishermen's opposition to the Chinese deep-sea vessels.

"Allowing the Chinese deep-sea trawlers to fish is tantamount to selling the seas of Baluchistan to them," Waju said. He vowed that the fisherman of Gwadar will hold strong protests against the new vessels starting next week.

March 06, 2010
Kabul/New Delhi/Washington, March 5 (IANS) India Friday said that the Feb 26 terror attack in Kabul will not deter it from helping rebuild Afghanistan as National Security Adviser Shivshankar Menon met Afghan President Hamid Karzai in Kabul to review the security of around 4,000 Indians working in that country. Menon, who arrived here Friday morning on a two-day visit, discussed with Karzai some proposals to bolster security of Indians engaged in a wide array of reconstruction activities, ranging from building roads, bridges and power stations to social sector projects. The Indian government is contemplating a slew of steps to secure Indians in Afghanistan, including setting up protected venues where the Indians working on various reconstruction projects will be based. Deploying dedicated security personnel at places where Indians work is also being considered. Menon also met his Afghan counterpart Rangin Dadfar Spanta and enquired about the progress in the probe into the Kabul atta
364 comments
Read more

March 27, 2010
Rethink before It’s Too Late http://www.irdiplomacy.ir/index.php?Lang=en&Page=21&TypeId=15&ArticleId=7108&BranchId=19&Action=ArticleBodyView Iran is losing the game to regional actors in its strategic depth –Afghanistan. By Houman Dolati It is no more a surprise to see Iran absent in Afghanistan affairs. Nowadays, the Bonn Conference and Iran’s contributions to Afghanistan look more like a fading memory. Iran, which had promised of loans and credit worth five-hundred million dollars for Afghanistan, and tried to serve a key role, more than many other countries, for reconstruction and stabilization of Afghanistan, is now trying to efface that memory, saying it is a wrong path, even for the international community. Iran’s empty seat in the Rome Conference was another step backward for Afghanistan’s influential neighbor. Many other countries were surprised with Iran’s absence. Finding out the vanity of its efforts to justify absence in Rome, Iran tried to start its
114 comments
Read more

March 24, 2013
By Jennifer Griffin, Justin Fishel Published March 22, 2013   A Pakistani fertilizer maker whose chemicals have been used in 80 percent of the roadside bombs that have killed and maimed American troops in Afghanistan is now seeking U.S. taxpayer subsidies in order to open a factory in Indiana.  The request appears to be on hold pending further review, but the situation has stirred outrage in Congress, where some accuse the Pakistani government of halting efforts to clamp down on the bomb-making.  For the past seven years, the U.S. government has known that the raw material calcium ammonium nitrate, or CAN, is making its way across the border into Afghanistan where the Taliban use it to fuel their most deadly weapons, namely the improvised explosive device. IEDs have long been the number one killer of U.S. and coalition troops.  The material largely comes from Pakistani fertilizer maker the Fatima Group. But the Pakistani government has stymied attempts by the Pentagon to stop the
371 comments
Read more